You Can’t Eat Gold (Or Bullets) 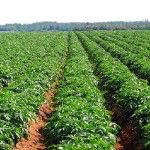 Every thinking person in America is at least considering the possibility of widespread collapse of our society either in the immediate or not too distant future.   Whether you believe we are headed to a catastrophic collapse or you think there will be isolated breakdowns in the social, legal and governing structures of this country, it is a useful practical and intellectual exercise to consider how you would protect, provide for and defend your family if your government were not able to do so for short or extended periods of time.

Are You Better off Today?

Look around you.   Do you believe our country is headed in the right direction?   Do you see economic, social or fiscal policies coming from Washington, DC, your state capital or the financial centers that you believe are leading to greater stability and prosperity in this country?   I see only policies that are leading us straight into economic and social Armageddon.   I could go all the way back to 1990 and the failure of the ” Buy American” movement.   For two decades our leaders have worked feverishly to transfer our jobs, our technology, our national treasure to other countries.  Surprise, two decades into this failed economic policy and we are a failing country.   To me it’s a simple equation.   You can’t make mortgage payments in America if you don’t make anything else in America.   We made steel and cars and furniture and textiles and food in America and increasingly we make none of those things.

The ” prosperity” of the last decade was fiction.   We didn’t earn that prosperity by producing value added goods and services, we borrowed that prosperity with credit and mortgages and lines of credit.   The Wall Street Wizards didn’t create any new wealth, they pilfered and siphoned and sucked away the wealth and equity that the World War II generation worked their entire lives for.   Now think about the billion dollar profits and the million dollar profits of Wall Street over the last several decades and especially just this year.   Record profits for Wall Street while middle America suffers like never before.   Where did the Wizards of Wall Street get all those profits they’re shoving into their pockets and sending away to offshore accounts?   They stole it from the American people.   They looted your 401k’s. They robbed your retirement accounts.   Do you think the SEC, the Fed, the Treasury has done anything to stop it?   Do a little post-mortem examination of the Bernie Madoff scam.   Can’t you see just how blatant, apparent and transparent his Ponzi scheme was?   Madoff was a simpleton, a charlatan, a novice and he pulled his scam off for decades with no attention at all from the people we foolishly trusted to protect us.   Now if he could do it on such a grand level, just what do you think the organized cabals in Wall Street, Zurich, Dubai, Shanghai and Munich have been able to do?   Sorry dad, sorry mom your 401k statement is fiction.

Are There Any Hopeful Signs?

In advance of last month’s G20 Summit, our government announced a new policy called QE2 or a second round of quantative easing.   This one is the second one because it’s the second time in recent history that our government has tried to spend our way out of the brink of Armageddon by turning on the printing presses.   QE2 was absurd and seen as chaotic and desperate. Our allies howled in protest and we sort of backed off it a bit.   The most recent example of economic absurdity and the failure of our government to respond to this crisis came just last week.   We can neither afford extended unemployment benefits or tax cuts, but we got both”¦..in my mind that just shows how much trouble we’re in.   Listen carefully to Wall Street, to your state capital and to Washington DC.   Do you hear any hints or whispers or suggestions of ideas that might start to turn this economy around?   I don’t hear a single word or policy or proposal that I think is sending us anywhere in the right direction.   And if there are no whispers which suggest we’re heading in the right direction than that can only mean we’re heading in the wrong direction”¦.and that’s scary.

We Need A Plan And We Need One Right Now.

Even if you’ve never even thought of owing a gun and even if you have no idea what gun powder smells like, do yourself and your family a favor and go to a gun fair or walk into a gun store.   Even if you find guns repugnant, just do it for the sake of your own education.   I’m an avid gun owner, member of the NRA and passionate supporter of our military and law enforcement and even I’m just flabbergasted by what I see at gun shows and gun shops.   Your neighbors are arming themselves in unimaginable degrees.   A chicken in every pot?   Try a militia in every house.   The problem is just who are they going to be shooting at and who are they (we) arming themselves against?   I’ve heard national security estimates that in a panic situation our food delivery system can supply only 48 hours worth of food.   Remember Katrina?   Just how many days did it take that isolated, small scale crisis to spin so wildly out of control?   And now for all you people hoarding gold and silver.   Just what do you think you’re gonna do with your shiny little trinkets when the mobs start mobbing?   When people start panicking and I-75 locks down because people can’t go anywhere, do you think you’re going to trade your one Krugerand for safe passage or a loaf of bread?   Sorry Charlie, the mob’s gonna shoot you, take all your shiny little objects and move on to the next big Suburban loaded down with provisions and precious metals.   And no offense to Glenn Beck and his overpriced ” survival food”, what exactly is your plan for when the powdered milk runs out?

The Meek Shall Inherit The Earth

All around this country there are pockets of good, hard working salt of the earth people who are living in some ways the way people did a hundred years ago.   I’ve been reaching out and meeting with these folks and I’m enchanted.   Part of this fascination started with a glass of grapefuit wine and some eggs from a family in North Florida.   Honest to God, the grapefruit wine tasted as good as the $200 bottle of La Dolce Far Niete I had years ago and there was something about seeing the happy little chickens pecking around their little pen that made me happy.   Just this week I visited homesteaders who are growing the most amazing vegetables I’ve ever tasted and making sausage and jerky out of everything that moves.   So here’s the deal.   You can keep your gold, I’m going to invest in the knowledge and the values and the ethics of the hardworking, self-sustaining American homesteaders.   Have you heard of the ” Locavore” movement?   Well think of this as an extension of this.   We need to reach out to our farmers and agribusiness communities.   The ornamental and decorative farmers have been decimated in this economy, but they can quickly return to food crops.   These families are suffering too, but the big shot city folks can help by reaching out in creative and formal ways to help promote and develop their food production and independent-living activities by investing in their efforts now.   I have a standing offer to agribusiness homesteaders right now and I want to encourage all you foreclosure defense attorneys out there to do the same”¦.if you’re producing food or have the ability to produce food and you’re supporting a family in my immediate area, I will consider representing you in foreclosure free of charge so that you can keep putting food on the table.   If you’re an old school Florida cracker who still knows how to live off the land and still believes that your homestead is sacred ground, but that sacred ground is threatened by foreclosure from a foreign trust or obscure bank, reach out to me”¦.please give me the honor of helping you keep your sacred ground.

For everyone else remember”¦ you can’t eat gold, but if you’re connected you won’t have to try!