The US- Blindsided by Turmoil in Egypt

We should all appreciate the significance of the civil war that has broken out in Egypt.   This will not end peacefully and it will not remain isolated to Egypt.   The relevance to our battles here in the United States are to break the delusion that our leaders have world affairs, and national affairs in hand.   I am convinced that eventually chaos will reign or at least some level of unrest, primarily because the oppressed here in the US will eventually rise up.   As voters, we need to understand the increasing volatility in the world and we need to be shaken from the delusion that our leaders have this chaotic world in control….but read the Wall Street Journal Article….

Two months before Egypt exploded in popular rage, Secretary of State Hillary Clinton met Ahmed Aboul Gheit, Egypt’s foreign minister, in her seventh-floor offices in Washington.   U.S. officials were miffed that Cairo was ignoring their pleas to make coming legislative elections more credible by allowing international ballot monitors. But after the meeting, neither Mrs. Clinton nor Mr. Aboul Gheit mentioned that disagreement when they spoke publicly. Mrs. Clinton praised the longstanding partnership between the U.S. and Egypt as the “cornerstone of stability and security in the Middle East and beyond.” 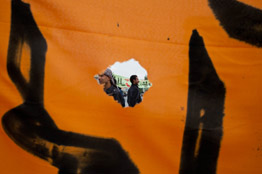 David Degner for The Wall Street JournalIn Al-Arish, a town in northern Sinai near the border with Israel, a group of protesters took to the streets after prayers in solidarity with protests in Cairo. 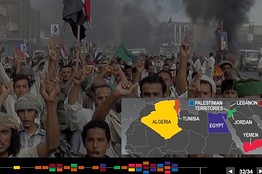 A succession of rallies and demonstrations, in Egypt, Jordan, Yemen and Algeria have been inspired directly by the popular outpouring of anger that toppled Tunisian President Zine al-Abidine Ben Ali. See how these uprising progressed.

Months later, that cornerstone is crumbling. A week-long wave of demonstrations has pushed President Hosni Mubarak to promise he’ll leave””and the repercussions of the tumult in the Arab world’s most populous land have only begun to reverberate around the strategic and volatile Middle East.