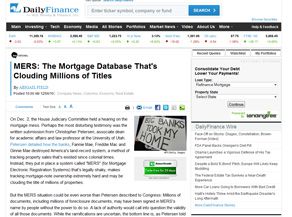 Millions of documents, including millions of foreclosure documents, may have been signed in MERS‘s name by people without the power to do so.   A lack of authority would call into question the validity of all those documents.

…the resolution that empowers Hultman to approve certifying officers was originally adopted by an earlier corporate incarnation of MERS, and it may not have been ratified by the current one. Unless the current MERS ratified the authorizing resolution or replaced it with another, whatever power Hultman had ended no later than Jan. 1, 1999, when the current MERS came into being