On Wall Street Pay Vaults Back Into the Stratosphere- You Happy ‘Bout That?

One of the practical roadblocks to fairness in the courtroom is the perspective that recognizing homeowner defenses and forcing the Wall Street Wizards that caused this mess to pay for their misdeeds is the perception that doing so will ultimately cost taxpayers.   This is simply not true, in fact taxpayers will benefit when cases are dismissed, the firms forced to refile and do things correctly.   The thing that makes me so enraged by all of this is knowing that Wall Street cut corners, took shortcuts and violated all of our rights because doing so increased their profitability.

When it comes to paychecks, Wall Street’s law of gravity is back in full force: What goes down must come back up. 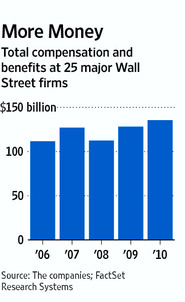 The increase was fueled by a revenue rebound as the financial crisis recedes in the rearview mirror. At 25 large financial firms that have reported full-year results, revenue rose to $417 billion, another all-time high, even though last year’s 1% increase was just a fraction of the industry’s revenue jolt from 2008 to 2009 as trading and investment banking sprang back to life.